At the end of last year I received an offer for JumpSend for a 3 month free trial of their ‘Starter’ package (currently $29 a month).  With this package you can send automatic follow-up emails to your customers for 3 of your products. You can also offer unlimited discount coupons on their deals page.

I’ve written before about the importance of reviews.  I did say there wasn’t definitive proof that asking for them necessarily gained you anymore.  I also said I wasn’t sure whether I could justify the cost of JumpSend once the trial was over.  So what’s the outcome?

You can create Deals (i.e. offer money-off vouchers) that will be displayed on the site for potential customers.  An interested customer will then request a code and you can decide whether JumpSend automatically sends them one, or whether you approve each request.

If you want JumpSend to approve them, you create the codes in Amazon Seller Central and paste them in when you set up the deal.

There are other steps you can take to protect your inventory such as:

Setting up a promotion is really simple and JumpSend guides you through each step.  There’s even a video explaining how to create the coupon codes in Seller Central.

One thing to bear in mind is that this is designed to get your sales going – not to get reviews.

The big question though, is did it work?

Well, not a single one of my codes was used – so, I’d say not.  I’m not convinced that the UK site is as well known as the US one.  (There are a lot less deals on there.)  However, I wouldn’t rule out trying it again, now I have the account.

I’ve brought a few things on there too, for a bargain price (which is maybe an advantage of it being a relatively well-kept secret at the moment!)

Campaigns are what the automated-email sequences are called in JumpSend.
For each product you choose, you set up a series of events that trigger emails being sent to your customers.  (There are already templates in place – both for the sequence and the actual email text – that you can use if you prefer.) 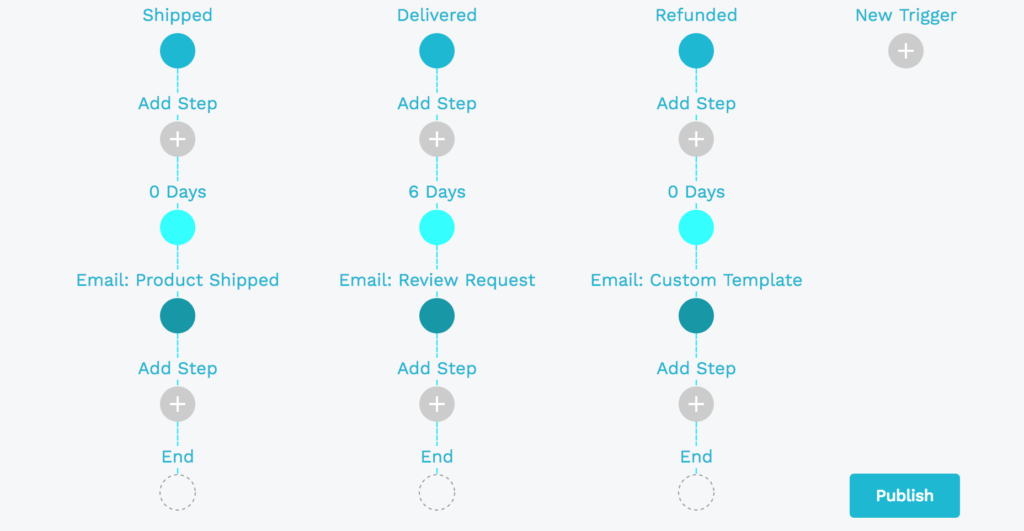 My example here shows that a customer receives an email when their product is shipped, another 6 days after delivery and an email if they request a refund at any point.

I may make some tweaks going forward – perhaps to the timings, wording (and maybe frequency) of the emails – but this is all really simple to do, once it’s set up.

You can have more than one product included in a campaign – as the system automatically pulls in the product name.  I choose to send separate emails however, as I word them slightly differently.

Have I been convinced enough to pay for it?

Campaigns is the feature that’s convinced me to sign up now my trial is over.  In fact, not only have I signed up, I’ve actually upgraded my plan to one with a 10-product limit ($59 per month), so I can use it in all marketplaces.

This has mainly been decided down to the trade of time for money.  While I was running the trial I was also manually sending the same emails to customers in the other European marketplaces (in their native language, obviously!)  This was taking anywhere between 10 minutes to an hour per day and involved me keeping a spreadsheet to keep track of it all.

Interestingly, reviews in these countries did increase.  So, I’ve decided it’s worth the monetary cost to save the cost on my time. (Which has a cost too.)

It took me a few hours to set up the campaigns for each product but, once that was done (on a rainy Sunday afternoon!) I felt really excited that I was now set for the week, with one less admin task off my list going forward.  (Although, I still do need to send the follow-up emails for any products purchased before my subscription started.  In around a week from now I’ll be done!)

Have you tried JumpSend (or another similar product)? What do you think?  Are you seeing an increase in customer feedback?

This website uses cookies to improve your experience while you navigate through the website. Out of these, the cookies that are categorized as necessary are stored on your browser as they are essential for the working of basic functionalities of the website. We also use third-party cookies that help us analyze and understand how you use this website. These cookies will be stored in your browser only with your consent. You also have the option to opt-out of these cookies. But opting out of some of these cookies may affect your browsing experience.
Necessary Always Enabled
Necessary cookies are absolutely essential for the website to function properly. These cookies ensure basic functionalities and security features of the website, anonymously.
Functional
Functional cookies help to perform certain functionalities like sharing the content of the website on social media platforms, collect feedbacks, and other third-party features.
Performance
Performance cookies are used to understand and analyze the key performance indexes of the website which helps in delivering a better user experience for the visitors.
Analytics
Analytical cookies are used to understand how visitors interact with the website. These cookies help provide information on metrics the number of visitors, bounce rate, traffic source, etc.
Advertisement
Advertisement cookies are used to provide visitors with relevant ads and marketing campaigns. These cookies track visitors across websites and collect information to provide customized ads.
Others
Other uncategorized cookies are those that are being analyzed and have not been classified into a category as yet.
SAVE & ACCEPT