I was in the garden with my four year old, chatting about jobs, while he was on the swing.  Initially, he was a little unsure about what he wants to do when he’s older. So unsure in fact that he wasn’t sure he wanted to decide in case he changes his mind.

I tried to explain that was ok and actually normal.  I shared how I wanted to be a lot of different things when I was a little girl (none of which I became) and that even as an adult I changed careers more than once.

I explained that before I had him I worked for a large company in London, that when I returned to work after having him I taught children’s yoga and that now, I sell baby products online.  To which he replied (quite vehemently) “No, your job now is Mummy!”

“Your job is Mummy”

I had mixed feelings about this. On the one hand, I’m pleased that he sees being Mummy as my main role – as it is.  A big part of me running this business has always been the fact that I can work anywhere, anytime, without it impacting on time with my children.  It seems like I’m managing to do that.

On the other hand, I do still want them to know that I work. Not because I don’t want them to think they’re the most important thing in my life (because they are), but there is part of me that wants them to see there’s more to me than Mummy.

I’d like to inspire them (especially my daughter, if I’m honest), by showing that it is possible to start up own business and follow your dreams. Their dreams might not be to have a business that works around their family, or maybe not to have a business at all, but I do want them to see that there are options and that if Mummy can do it so can they.

I want them to see that it is possible to do something you enjoy and that you should, at the very least, aspire to that.  I do know that it isn’t always possible but, as a child, shouldn’t you always be able to dream big?

I also got a sense that my little one was almost scared to choose a job in case he failed.  Hopefully, once he’s older, he’ll realise that Mummy is scared of that all the time (and was almost too scared to start), but it does get easier and it’s an amazing feeling when you succeed. I think we might have a few years before he understands this one though!

What do you think?  Am I crazy to think that any of this will matter to young kids?  Am I better to, for now, be pleased that they recognise their Mummy is always there for them and aim to inspire them once they’re older?  I’m wondering if I’m trying to have it all rather than just being thankful for how things are.

P.S.  He eventually settled on being a lollypop man or an astronaut. 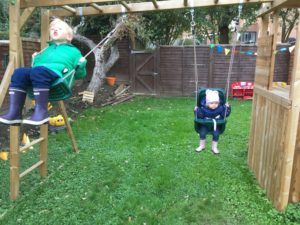