There are different methods to choosing what products to sell, depending on who you speak to.  I tried paying for a service where someone tells you what products are ‘hot’, where you can source them, how much you should be paying, how much you can charge for them, etc.  I figured out pretty quickly that amounted to paying someone for research I could easily do myself.  Thankfully there was a 30-day money back guarantee, so I asked for my money back pretty sharpish and put what I’d learnt into practice.

After some research on Google trends, Amazon, and a big of gut instinct, I decided to sell swaddles.  And this is where the journey really began…

China seems to be the place to source everything and the site most people point you to is Alibaba.com.  It’s basically a huge marketplace of absolutely anything that anyone might possibly want to buy, mainly sourced directly from the factories.

There are so many sellers on there that it’s really overwhelming. Even though I knew what I was looking for (extra-large, 100% bamboo muslin swaddles that can be customised) there still ‘appeared’ to be so much (in fact too much) choice. I say appeared, as, it turns out when you speak to some of the sellers, that they may not actually be able to meet your needs – but they’ll often say they can on their site and sometimes even at the first contact.

I decided to start out by identifying 10 suppliers that looked like they could do what I needed, contacted them with a brief and asked:

I had a spreadsheet to track the information they gave me when they replied and I gradually used that to whittle them down.  It essentially came down to price, including shipping costs (which is a complex thing in itself as you need to check if a quote is DDP (Delivered Duty Paid) meaning the seller pays the duty, or DDU (Delivered Duty Unpaid) which means you have to pay once it reaches the port).  I still haven’t figured out quite how the duty thing works, so have paid for my order to be sent from China, to the Amazon warehouse, with the duty included.  This may not be the cheapest option (I need to look into it more for next time), but it certainly seemed to give me less of a headache.

I also took into account who I was dealing with – i.e. I didn’t want to speak to anyone really pushy, I needed to be sure that we could understand each other clearly and I didn’t want to wait days for a reply. In fact, my contact at the factory I’m working with (let’s call her Jackie) is so quick to reply I think she’s either been cloned, or she never sleeps.

Probably my biggest learning is to be extremely clear with what you want (with yourself) at the outset and make sure you communicate that clearly. I hadn’t thought about whether I wanted to the design to be done by one of the factory’s designers or whether I would find someone here to do it (which I did, more in another post).  Had I been clear on that earlier on, it would have saved a bit of toing-and-froing and a lot of time.

Ordering a sample is pretty essential – so you can see what it is you’re paying for.  Ideally, you’d do that from a few places and compare them, but as my product is what’s called ‘private label’ (the box and the swaddles themselves are customised) it just wasn’t practical or affordable.

The day my samples arrived was the first day it all felt very real. I’ve been through a few stages of pure fear since starting out on this and that was the first biggie! I’m hoping that pushing through that fear will be one of the things that makes this successful. Anyway, apart from the box being slightly squashed in transit (very disappointing) all was good and ‘the massive order’ (as Jackie puts it!) was placed. 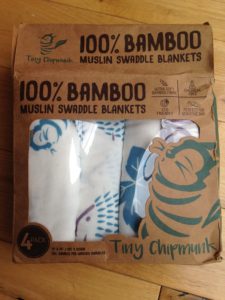 Sending any amount of money to China (or anywhere for that matter) is scary. And there have been plenty of scare stories around.  I followed these tips before placing an order and, while sometimes I’m still terrified that maybe there is no factory and my money is lost forever, I have (hopefully) taken all the precautions I can to prevent that.