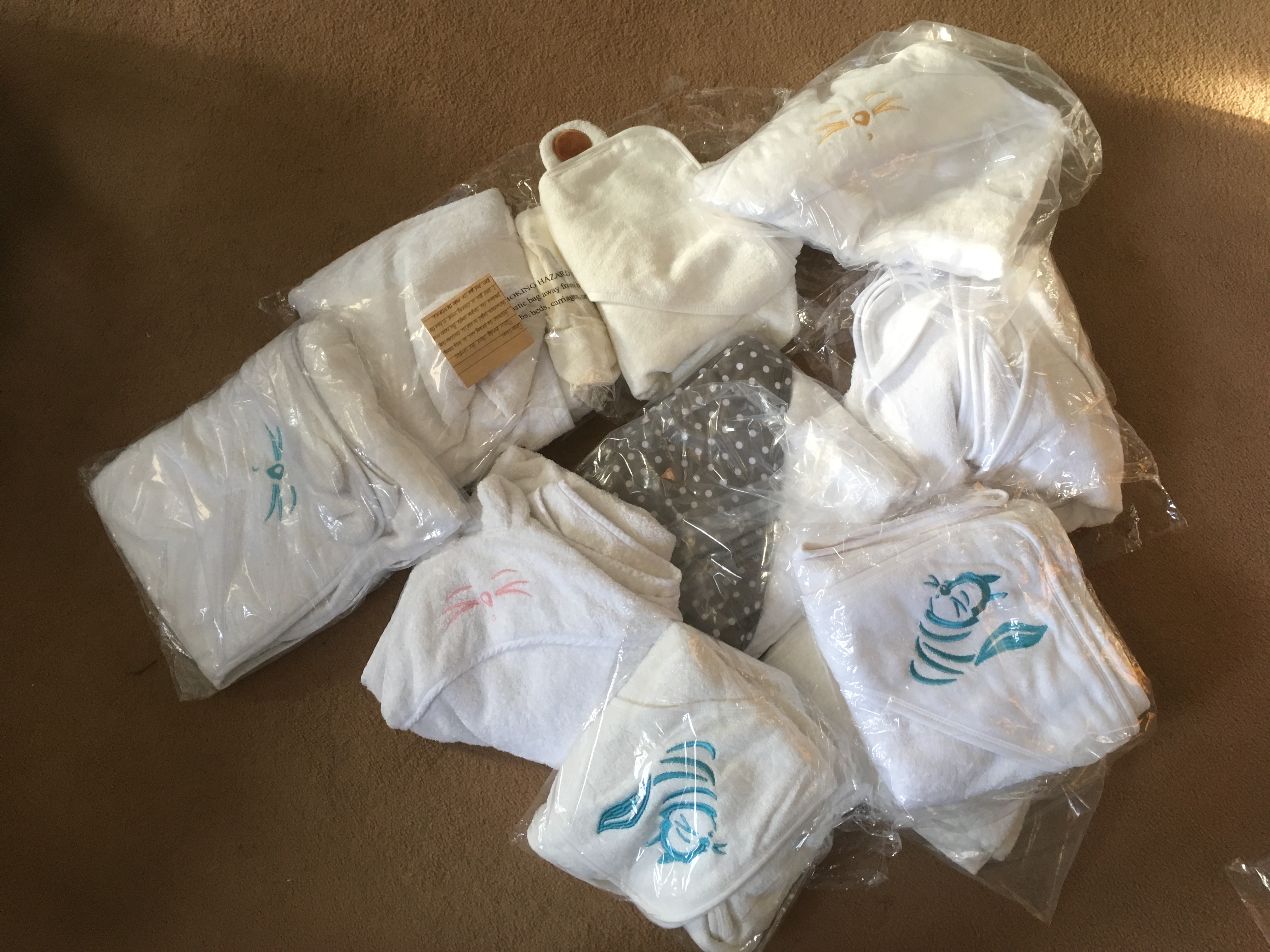 Last week (I’m a bit late in writing this) my final sample arrived! This was pretty exciting, as it was what I hoped would be (and it actually will be) my final item.  I mentioned in my last post about suppliers that after seeing the first sample, it actually prompted me to order a fourth – as I didn’t think the concept was quite right.

I can now reveal that my new product is….a bamboo hooded baby towel!

You can see some of the first samples pictured here.  I knew I wanted it to have a hood, ears, high-quality gsm (grams per square metre) and something to differentiate them as ‘Tiny Chipmunk’.  My first thought was to embroider the logo onto the hood, but that didn’t look quite right to me. 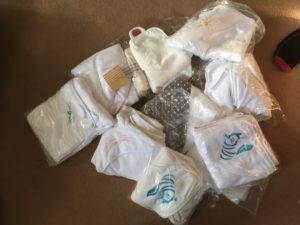 Yes, I ordered a lot of samples…

I ordered a variety of towels ranging from 500-600gsm.  While I knew I wanted unbleached bamboo, I also asked for a bleached version, just to see the difference.  One supplier also kindly sent a cotton towel, so I could compare it to the bamboo.  Most suppliers were very happy to include a few variations with what they sent, which is really helpful.

When looking at the samples I paid close attention to things like the quality (were there any loose threads, how good was the embroidery, etc) and how thick and soft they felt. I also washed and dried the towels and used them on my toddler at bathtime to see how they stood up to everyday use.  I really recommend actually using your products when you’re considering them.

I also sent some photos to family and friends, plus showed people the towels in ‘real life’, where this was feasible, to get some more input.  It can be pretty scary opening yourself up to feedback, but it’s definitely worth it, as your product needs to be sellable and not just something you like.

We’re now just negotiating on price, shipping and a few other details before the order is finalised.  I’m aiming to increase my margins as much as possible (without skimping on quality).

Now we have a product I’m happy with, I feel more comfortable about negotiating, as the supplier knows I’m serious about placing an order.  The cost was much higher than any of the others and once I mentioned this they were happy to come down.

The same applied to the box, which I felt was priced very high compared to others I’d seen, but they are now looking at alternative factories.  Do be aware that ‘extras’ such as packaging, washing labels (where applicable) might not be included in the cost, so do make sure you’re clear on this, so you can work out your margins accurately.

Also, I would recommend getting these ‘extra’ prices from multiple suppliers when you first make contact and order samples. This will give you a benchmark and you’ll be able to see if the cost of anything looks way off – like my example with the box. (Both too expensive or too cheap isn’t good!)

From what I can gather, relationships are valued in China and I’m working hard to build a positive relationship with my suppliers, rather than trying to cut them down on the price the entire time.

There’s also shipping to consider, but I think that deserves a whole post of its own…